Air Pollution during Delhi Winters - How Bad is it?

For multiple reasons, the winters are the worst in Delhi, India - harsh winters, limited air movement, and restraining meteorological conditions worsen the already topped out air pollution problem. Access the real time air quality monitoring data from nine stations in Delhi here, operated by the Central Pollution Control Board and Delhi Pollution Control Committee. An article from January 8th, 2010, in India Today reads "Blame air pollution for Capital's blanket of fog". This is very true. For example, the low lying emissions do increase during the Delhi Winters, such as extra heating that is required and use of biomass (or anything people get their hands on). In addition to that, this phenomena has more to do with the meteorology typical to these latitudes.

The Center for Science and Environment (CSE) in Delhi, India, organized a gathering of air pollution experts to review the pollution problems and here is what they have to say

In the SIM 25-2009 working paper, "Photochemistry of Air Pollution in Delhi, India: A Monitoring Based Analysis", the monitoring data from the Indian Tax Office (ITO) station in Delhi, India, is analyzed to explain the observed trends in the criteria pollutants, PM2.5, NOx, CO, and Ozone. The photochemical formation of Ozone, including the seasonal and diurnal cycles, influence of NOx-VOC chemistry and policy implications of further controls is discussed in this paper.

Figures below present the correlation between the observed monthly 24-hr averages over the period of 2006-09. The measurements for the summer months are separated. 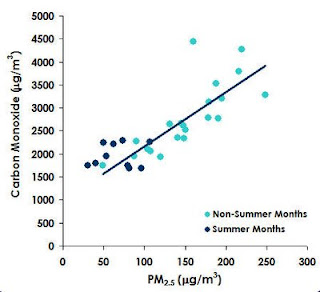 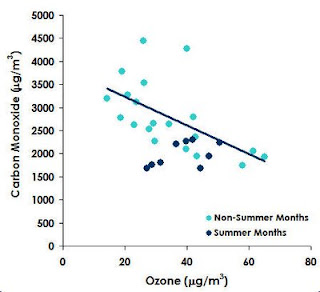 In this regards, a study of air movement over urban areas can help us better understand the movement of pollutants and their respective impact on pollution planning. The role of meteorology as a diffusing or non-diffusing agent, is studied using 20 year meteorological fields over Delhi, India and its impact on air pollution dispersion. See the animation of the dispersion patterns by clicking the image below. 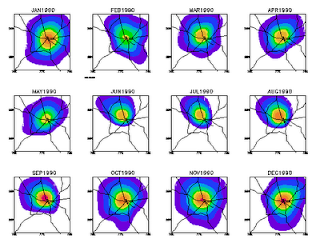 Some figures from the report are presented below.

A back trajectory analysis was also conducted to assess the influence of emission sources outside Delhi. See the full report.